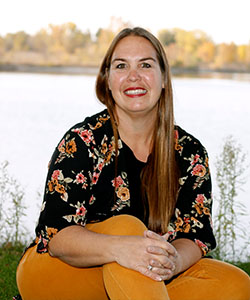 Dr Melissa Girard-Lemons (Dr. Missy) was born and raised on a poultry, swine (farrow to finish) and cash crop farm in Osceola, Nebraska. Her parents are Ron and Deb Girard of Osceola, Nebraska and she has a younger sister (Kara) and younger brother (Tim). She attended undergraduate school at the University of Nebraska-Lincoln, where she was active and held several offices with campus organizations such as Pre-Vet Club, Mortar Board, College of Agricultural Science and Natural Resources Student Government and the Alpha Chi Omega Sorority. Missy graduated from Kansas State University College of Veterinary Medicine in 1999. She has practiced for over 15 years in Grand Island, Nebraska, with the Animal Medical Clinic and in 2005 she purchased the practice and built a new building in 2007. Animal Medical Clinic is a three doctor progressive small animal veterinary clinic where an emphasis is placed on education, communications and passionate caring. She enjoys getting to know each and every client and pet to better meet their medical needs.

Missy and her husband, Tim, were married in June of 2008 and have six, four legged children of various sizes and shapes. (Tim was a client of the clinic and that is how the romance sparked. Gained a husband; lost a paying client!!) Together Tim and Missy have 10 nieces and one nephew.

Dr Missy is involved with the Prairie Pioneer Quilt Guild and severed on their board of directors for 7 years, has been a member of Alpha Sigma philanthropic sorority for 15 years, and currently serves on the City of Grand Island Animal Advisory Board. Dr Missy is an avid and active supporter of the Central Nebraska Humane society. She is currently the Past President for the Nebraska Veterinary Medical Association and continues to serve on the continuing education, scholarship and legislative committees.

She is an active member of the Nebraska Veterinary Medical Foundation and has helped develop the new fundraisers “Pottery of Promise” and ” NVMA Talent Showcase Auction” with the Friends and Family of NVMA. She is also active and involved in the Nebraska State Fair Birthing Pavilion where she helps organize the volunteer veterinarians and has enhanced the poultry display by incubating and hatching chicks. In her free time she enjoys quilting, cooking, gardening and of course spending time with her critters and husband. 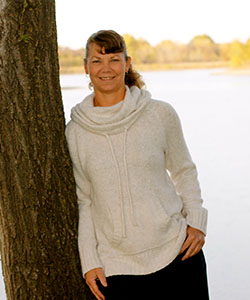 Dr. Jen Summers grew up in York, NE then went to undergraduate school at the University of Nebraska at Kearney after spending a year in Finland as an exchange student. She graduated with a Bachelor’s of Science, Comprehensive and went on the veterinary school at Kansas State University. She graduated in 2000. She has two children: Noah, born in 2003 and Skyler, born in 2005. She joined Animal Medical Clinic part time in 2004 and has worked up to full time. Dr. Jen enjoys spending time with her kids, her dogs and cats, traveling, reading, movies, cooking and baking. 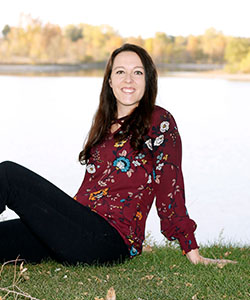 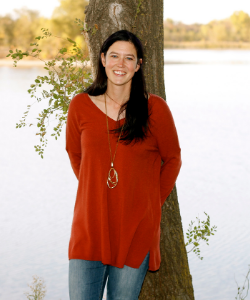 Dr. Elizabeth Prigge grew up on a farm in southern Butler County, where her parents and siblings still reside. She graduated from Doane University in Crete, NE, with a degree in biology and then headed south to Manhattan, KS, for vet school. She graduated from Kansas State in 2012 and spent a couple of years in mixed animal practice. She then pursued the public health side of the profession, working for the USDA for 5 years. While working in the public health realm was a valuable experience, she did not see it as a lifelong career. She joined Animal Medical Clinic in 2020. Dr. Elizabeth enjoys running, traveling, dancing, learning new things, cheering for the Huskers AND the Wildcats, and spoiling her two nephews, her dog (Josie) and her cat (Reese’s). She is a member of the AVMA and NVMA. 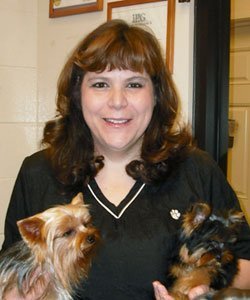 Jill Simons has lived in Grand Island most of her life. She is a 1982 graduate of Grand Island Senior High, and a 1984 graduate of the Nebraska College of Technical Agriculture. A Certified Master Groomer, Jill has been grooming for over 25 years. She was trained by Nadine Matthews and became a CMG – Certified Master Groomer in 1998. Jill and her husband, Kevin, have five children; Meghan, Mandy, Marlee, Kaitlyn, and Kevin. They also have many furry children, including two Yorkies (which she breeds), two Chihuahuas, and two kitties. Jill also breeds and shows ferrets. 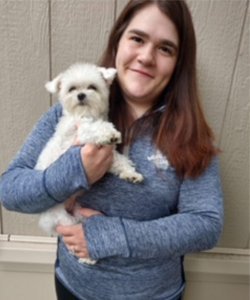 My name is Kaitie, I am the daughter of the full time groomer, Jill, here at the Animal Medical Clinic. I have lived in Grand Island my entire life. I have 4 siblings, Meghan, Mandy, Marlee and my twin brother Kevin. I am currently training to follow in my mother’s footsteps to become a dog groomer myself. I graduated from Grand Island Senior High school in May 2015. I started working at AMC in May 2016 to pursue my dreams of being a dog groomer. I am engaged to Logan Thies, and we have one beautiful daughter Josephine Marie. Also I have two fur babies Zoey and Cruiser.

Evan Stelk, a Grand Island native, began his career with Animal Medical Clinic in 1997 as Northwest Highs School student, assisting with kennels. After high school, he left to pursue his interest in veterinary technology, earning an Associate Degree in Animal Science from the Nebraska College of Technical Agriculture in Curtis, Nebraska in 2002. He returned to Animal Medical Clinic, and serves as our Practice Manager and Licensed Veterinary Technician. Evan was married to his wife Heidi in 2012 and they had their first two legged son in 2013 and a daughter in 2016. They also have two dogs; a Yellow Lab mix named Cooper, and a Yorkshire Terrier named Dewey. 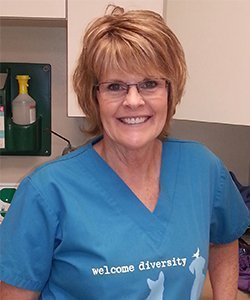 Vickie grew up in Hastings, Nebraska, where she attended Hastings College. A resident of Grand Island since 1981, she joined the team at Animal Medical Clinic in 2002 as a kennel assistant. She has received ample on-the-job training and is an amazing veterinary assistant. Vickie and her husband, Bruce, have three grown daughters and many furry children. Vickie’s favorite hobbies include her horse, various outdoor activities, and most of all spending time with her grandchildren. 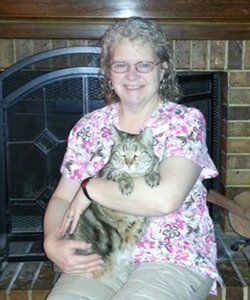 Kathy Nabity is a Licensed Veterinary Technician who graduated from Nebraska College of Technical Agriculture. After working in clinics in Lincoln and Norfolk, she spent seven years as a stay-at-home mom, before joining Animal Medical Clinic in 2007. Her husband, Chad, is the Grand Island Planning Director. The couple has two sons, Will and Lee, a cat named Suki, a dog named Jake, chickens, turtles, and rabbits. On the job, Kathy especially enjoys lab work and client education. In her “free” time, she stays plenty busy as a Stampin’ Up! Demonstrator, Boy Scout Volunteer, and working in the garden. 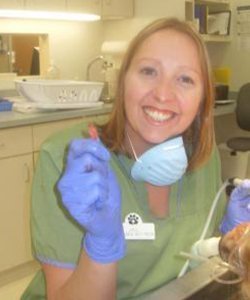 Jill is a Licensed Veterinary Technician born and raised in west Iowa. She graduated from Vatterott College in Omaha, NE. She had worked at several small/exotic animal hospitals in Omaha before moving to Grand Island in November 2011 and accepted a position with AMC. She has 3 children and lives with her husband on an acreage with cats, dogs, horses, cattle, goats, sheep, pigs, chickens, turkeys, and ducks. 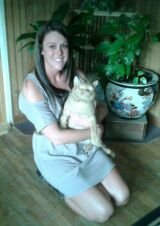 Jacoby was born and raised in Kearney where she graduated in 2007. She attended school in Omaha and received her Massage Therapy license in 2009.She now lives in Grand Island with her husband and two children. She joined the AMC family in the fall of 2011. Her past veterinarian assistance experience has helped her tackle many different tasks here at the clinic.She loves spending her free time with her family and friends or reading books. She also has two furry friends named Ace, and Ventura that
complete the rest of her family. 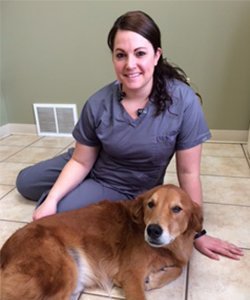 Christina, a native of Colorado, is one of our Licensed Veterinary Technicians who graduated from Nebraska College of Technical Agriculture in 2005 with an Associates of Applied Science in Veterinary Technology. She has been a Licensed Technician for 6 years. She originally joined our team in Aug of 2007 until she moved in Nov. 2011. She returned to our AMC family Sept 2014. She spends her free time volunteering as a mentor for the Teammates program and is an active member of the Community Club in Fairfield, NE. She also enjoys playing league volleyball in the summer, basketball, riding horses & going to the lake with friends. She spends the rest of her time with her boyfriend Josh, Golden Retriever Kyle, Yellow Lab Chester, and American Paint Horse Scout.

Katie has lived in the Grand Island area most of her life. She is one of our newest staff members. Katie began her journey working with animals in 2013 when she decided to enroll at Penn Foster College’s online program and pursue a degree in Veterinary Technology, and to become a board licensed veterinary technician. Soon after, she accepted a position as a veterinary assistant at the Central Nebraska Humane Society where she worked for 2 ½ years. Katie is excited to finish her degree while gaining hands on experience in a clinical setting. Katie and her husband reside in Grand Island with their two hairy children; Finneas (a Siberian husky) and Gimley (a lovable rescue mutt). Her favorite hobbies with her family are hiking, dog training, and baking. 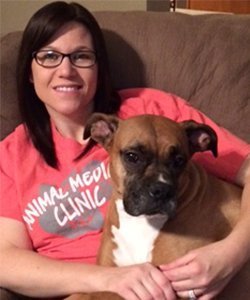 Kelli Pfeifer was born and raised in Grand Island, and has been part of the AMC family since 2007, serving as a full-time receptionist and bookkeeper. She became the Office Manager in June of 2013. Kelli lives in Doniphan with her wonderful husband and five amazing children. She has one super cute dog Chloe, a boxer, and a very lazy cat Daisy Mae. 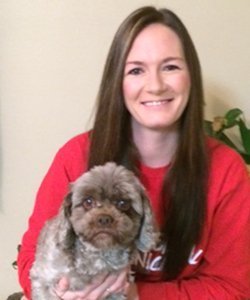 Jenn Brei was born and raised in Grand Island and is a 1999 graduate of Northwest High School, Jenn has been with Animal Medical Clinic since 2007. Jenn serves many functions at the clinic, from kennel assistant to technician, and front desk receptionist. She lives in Marquette with her husband, Tyler, and son Chase. 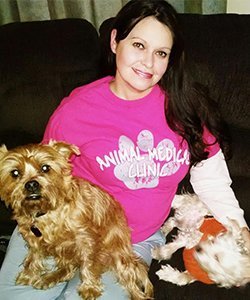 Crystal Lewandowski is originally from Edgar, NE. She joined the AMC family in July of 2014 as a full time receptionist. She and her husband and son share their home with 3 dogs, several cats, and 2 horses!

Linda Jelinek retired in June of 2013 after 25 years of wonderful servie she had been with Animal Medical Clinic since 1988, beginning with kennel work, front desk duties, and assisting veterinarians. In 1995, she became clinic’s office manager. She holds an Associate Degree in the Medical Secretarial field from C.E. School of Commerce in Omaha (1968). Before joining Animal Medical Clinic, Linda worked for 12 years for two medical doctors. Linda and her husband, Chuck, are allowed to stay in a house owned by Emily, and Old English Sheepdog; and two “queen bee” cats, Sophia, and Sally. The rent is relatively cheap—loads of love, attention, spoiling and lots of food and treats! 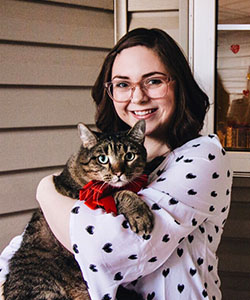 Lyndsey is a Grand Island native. She spent the start of her adult life working in childcare and as the assistant to the Office Manager for Connect at Third City Christian Church. She then moved to Lincoln to pursue her higher education. While living in Lincoln, Lyndsey worked as a receptionist and legal assistant for a law firm. She recently moved back to Grand Island to be closer to family. She quickly fell in love with AMC and joined the team as a full-time front desk receptionist in September 2020. Her hobbies include creative writing, drawing, and cuddling the office cats. Lyndsey has two cats of her own, Nico, her beloved big tabby, and Fizzgig, her free-spirited grey rescue kitten. 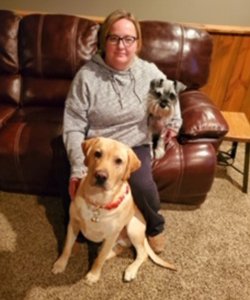 Lacey joined the AMC family back in July 2019. She lives in St. Libory, NE with her husband, two boys, four fur babies and three horses.

Our clinic is one of five local clinics that participate in an on-call service. The veterinarian on-call will assist you with whatever you need until you can get into our office.

Beginning on Wednesday, July 1st, 2020 we will be updating our Covid-19 operations at the Animal Medical Clinic.